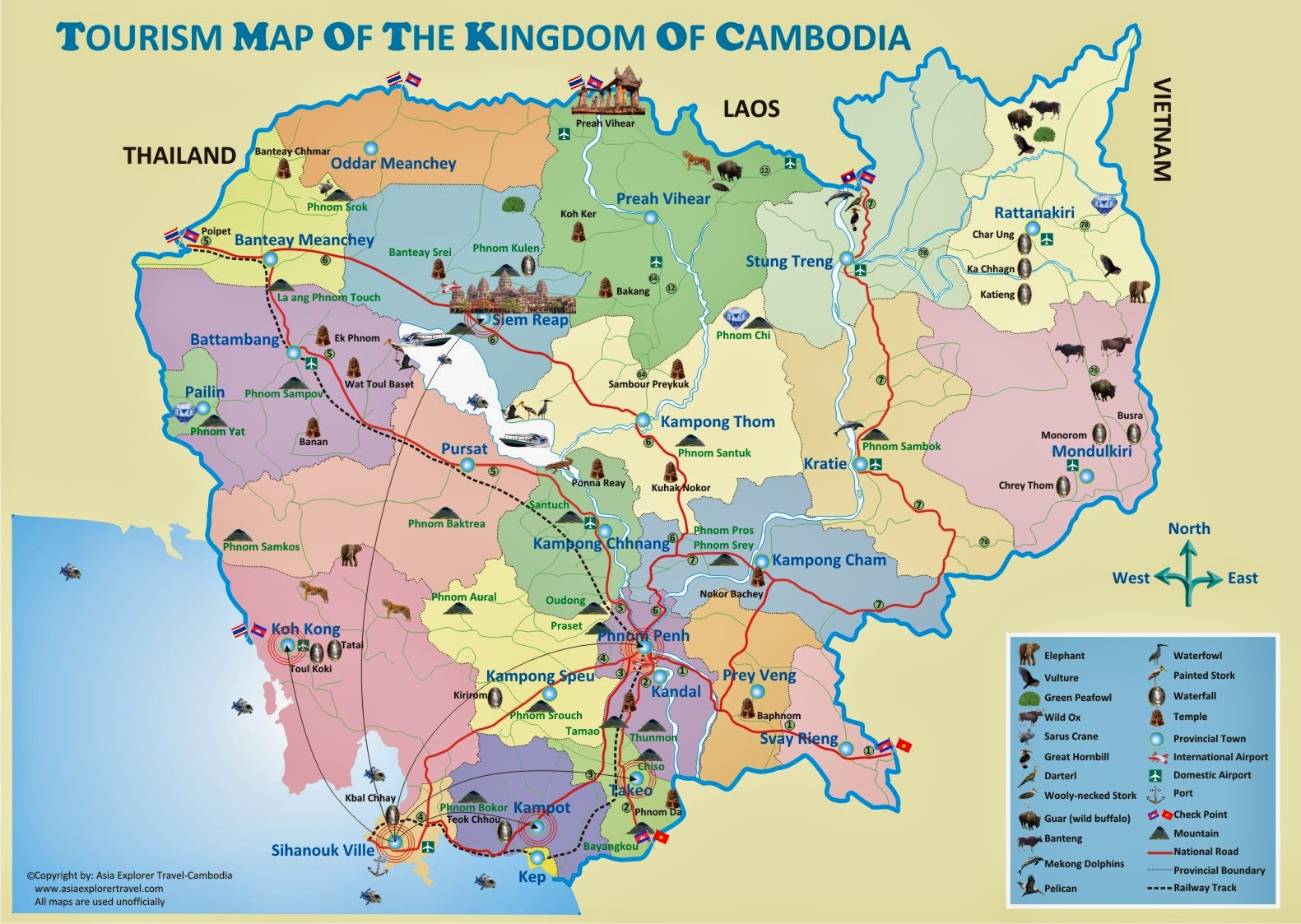 A cultivated country with something exciting to offer every traveller. Cambodia is still less visited than its neighbours Thailand and Vietnam, but the iconic Angkor Wat – a fascinatingly complex stone temple that is the world’s largest religious monument – draws visitors in their thousands.

Cambodia’s charms though are not confined to Angkor Wat. In Angkor alone there are more than 290 other temples.

The mountain-top Praeh Vihear temple-complex in northern Cambodia is as good as anything in Angkor and in a more stunning setting.

In the south you’ll find Sihanoukville’s paradisiacal beaches and great nature-watching opportunities in Ream National Park. Or head to the wilds of the east for waterfall hikes, elephant treks, dolphin-spotting and hilltribe-visits.

When to go to Cambodia

Cambodia’s dry season runs from November to April and the weather is ideal from December to February when humidity is at its lowest – although this is also the busiest time for tourists.

The wet season isn’t such a bad time to visit. Hotel rates are lower and it only rains for short periods each day. Travelling by boat is easier in the wet season as the rivers are higher but road travel can be tricky as sections of the road become impassable.

Cambodia’s jungles are bursting with lush foliage throughout the year. The Mekong river’s Irrawady dolphins are more easily spotted in the dry season.

This is also the best time to visit Tonlé Sap (Southeast Asia’s largest fresh water lake) since the water birds for which it’s famous are in greater concentration.

Getting around in Cambodia

Several local carriers fly between Siem Reap and Phnom Penh. The journey is an easy 45 minutes but the airlines serving this route come and go out of business worryingly quickly.

Boats run between Siem Reap and Phnom Penh via Tonlé Sap, with the express service taking just 5 hours but they are pricey in comparison with bus services.

Express bus services run between Phnom Penh and Cambodia’s other major towns from as little as 4 US$. In peak season, spaces fill up quickly. It’s advisable to buy tickets at the bus station the day before you plan to leave – at the latest.
Buses depart regularly from Siem Reap into Thailand for as little as 15 US$ each way. Both buses and mini-buses also make the journey from Siem Reap to Phnom Penh daily for 10 US$ per person. Buses from Phnom Penh to Sihanoukville start from 10 US$. Other routes, like Siem Reap to Sihanoukville, are a bit pricier at 15 US$ one way and can go up as high as 35 US$.

Cambodian towns lack public transport but taxi, tuk-tuk and motobike taxis are plentiful and hiring bicycles is a fun way to get around.

There are no longer any passenger trains running on Cambodia’s crumbling rail network. The brave can try hitching a lift on a cargo train but at an average speed of 20mph journeys are painfully slow.

Ardent rail fans should try the bamboo trains running around Battambang. It costs 8 US$ to hire a private bamboo train but sharing your carriage with pigs, motorbikes and mounds of rice is what makes the experience.

Accommodation in Cambodia’s main draws – Phnom Penh, Siem Reap and Sihanoukville – covers the whole spectrum from luxury palaces where you can spend up to 400 US$ a night to budget rooms from as little as 5 US$.

Further afield, accommodation tends to be limited to basic guesthouses, but these often family-run establishments are a great way to give back to the community if you choose the right one.

For the uninitiated, Cambodian cuisine is closest to Thai but the spices are less pronounced.

Chicken or fish amok – a coconut, chilli and lemongrass curry served in a banana leaf - is delicious. Other delicacies include krolon (sticky rice and coconut steamed in bamboo) and nem (parcels of fish-meat).

Vegetarians will usually have no problems but it is easier for those who can live with the occasional drop of fish sauce or shared woks.

The national beer is the very quaffable Angkor and for those undaunted by howling hangovers, local spirits such as rice wine aren’t bad either.

Landmines persist in extremely remote locations so if you do plan to go off the beaten track, take a local guide.

Inoculations against typhoid, hepatitis and tetanus are advisable but consult your GP or travel clinic first.

There is no malaria in Phnom Penh and Siem Reap but those venturing further afield should consider taking anti-malarials. Drink water only from sealed bottles.